A Look at How 4-Day Workweek Benefits the Workplace

What do employees want? 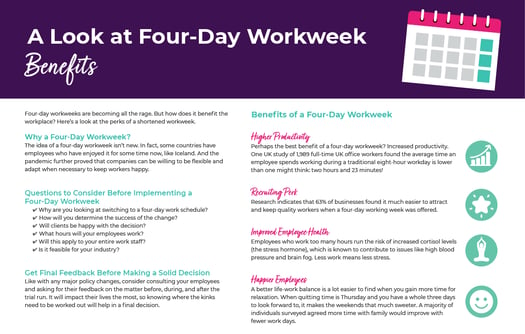 By the looks of it, a four-day workweek is at the top of the list.

More than 90% of U.S. workers claim they’d want four-day workweeks, according to a January Qualtrics survey. Gone are the days when a traditional 9-to-5 worked for both employees and employers. Workers are shifting the way they want to work and if workplaces want to keep them happy, then dangling four-day workweek benefits may just work.

Below, discover the benefits of a 4-day workweek, studies on how it’s worked out in various countries so far, and the pros and cons of doing so in your own workplace.

Why a Four-Day Workweek?

The idea of a four-day workweek isn’t new.

In fact, some countries have employees who have enjoyed it for some time now, like Iceland. And the pandemic further proved that companies can be willing to be flexible and adapt when necessary.

From 2015 to 2019 Iceland participated in the world’s largest pilot study on what a 35 to 36-hour workweek would look like. Because of the trial’s success, about 90% of Iceland’s working-class now have reduced hours.

Many argue that not everyone needs to stay at work for 40 hours to get their job done each and every week. On that same note, many workers also have made their case that work can be done in four days instead of three. Employees are willing to consider the payoffs when it comes to working a little harder in order to have extended weekends.

Physical and digital workplaces are now the norm for many companies, meaning that testing out new ideas for the sake of productivity and employee happiness when it comes to more flexible schedules is more than a smart business move. It’s a way to keep current employees cycling along and new recruits interested.

A recent survey of the 1,000 workers surveyed by January Qualtrics found:

With other countries like Japan and Germany giving it a try, it’s worth noting how organizations are changing with the times to keep workers happy on the job.

Curious about how an extra day off would be good for your company and employees? Here’s a look at some of the best perks of a shorter workweek:

A better life-work balance is a lot easier to find when you gain more time for relaxation. When quitting time is Thursday evening and you have a whole three days to look forward to, it makes the weekends that much sweeter. A majority of individuals surveyed agreed more time with family would improve with fewer work days.

Perhaps the best benefit of a four-day workweek? Increased productivity. One UK study of 1,989 full-time UK office workers found the average time an employee spends working during a traditional eight-hour workday is lower than one might think: two hours and 23 minutes! There’s an incentive to push harder and work more diligently when workers know they need to get things done in four days instead of five.

If your physical office is shut down for a whole day each week, you can imagine the cost savings between electricity and all the other bills that come with running a company. Workers who normally commute and go out to lunch each day will find their cost savings add up, too.

Employees who work too many hours run the risk of increased cortisol levels (the stress hormone), which is known to contribute to issues like high blood pressure and brain fog. In fact, one study shows that working too much — 55 hours or more weekly — is considered a “serious health hazard.” The study found that longer working hours led to 745,000 deaths worldwide in 2016. A better work-life balance means being able to focus on relaxing and reducing stress when not on the job, which is best for overall health.

These days, candidates are looking for more than just steady pay. When an extra day off is thrown in the mix, it’s even more appealing to potential job applicants. Research indicates that 63% of businesses found it much easier to attract and keep quality workers when a four-day working week was offered.

Down Sides to a Four-Day Workweek

For every pro there’s a con, right? Some may say that a four-day workweek isn’t all it’s cracked up to be. Here’s a look at some of the downsides of cutting back one day off your company’s workweek:

Not for Every Business

If you have a company that customers rely on five or even seven days a week, this business model is obviously not a good fit. However, offering employees a flexible working schedule or a hybrid model may be an option to consider.

Depending on your company’s services and offerings, it may not be feasible to completely cut away an eight-hour work day. Those hours may need to be added to the other four days a week, making shifts longer at potentially 10 hours a day. This might not be a good option for working parents who have to consider childcare arrangements for the extended hours of work.

If your staff doesn’t have the discipline or tools to work more efficiently, cutting a full work day could make them less productive. Knowing your team and their strengths are key to making the decision to go down to a four-day workweek. They may surprise you and be more productive, but it’s all in knowing how your individual employees and departments function to make the best choice.

Remember, longer days can be more stressful and take a toll on workers’ health if they don’t take proper breaks. If you opt for longer days, be sure to mandate breaks throughout the day to encourage energy stabilization and efficient work cycles.

Will Your Company Embrace a Four-Day Workweek?

So, will your company offer a four-day workweek?

Like anything, a good trial period (say 90 days or so) would be an excellent indicator of how it would work for your company long-term.

Like with any major policy changes, consider consulting your employees and asking for their feedback on the matter before, during, and after the trial run. It will impact their lives the most, so knowing where the kinks need to be worked out will help in a final decision.

One last food for thought: In the era of the Great Resignation when it’s hard to recruit quality talent, this can be a perk that makes your company stand out from the rest. It will also keep current employees happier, potentially. One Henley Business School study of over 2,000 employees and 500 leaders from November 2021 found that a four-day workweek positively impacted well-being. A whopping 78% of employers said employees felt less stressed at work.

We say cheers to that.

What do you think of a four-day workweek? Would it work well for your company? Share your thoughts below!