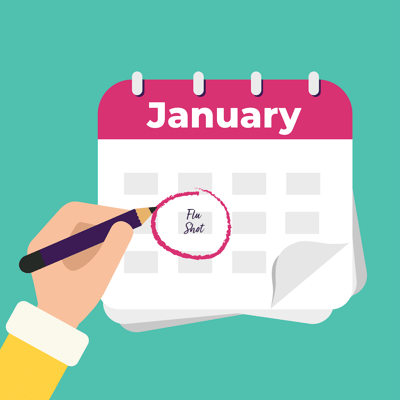 Yes, the flu is still around.

And no, it’s not too late to get flu shots in January.

Flu season typically starts at the beginning of fall and tapers off toward the end of spring. Given that this flu season got off to an unusually strong start  — with flu-related deaths being up more than 65% in 2020 so far — considering a flu vaccine isn’t a bad idea.

So far, 9.7 million people have gotten the flu this season.

Preventative measures — like the flu vaccine — are still available.

Below we dive into the flu season so far this year and tips for employers to avoid the spread of it in the workplace.

Other than starting earlier than normal, the flu season this year is causing quite the ruckus. The first eight weeks of this flu season included five states (and Puerto Rico) with the highest recorded level of flu activity since 2012.

The flu has four different strains, A, B, C, and D. The two that rattle us the most during flu season are A and B. The C strain will cause mild respiratory issues while D is only prevalent in cattle.

Strain A mutates and is the cause for epidemics, but B is historically more dangerous to children. Seasons usually start with A, but the 2019-20 season started strong with B.

The most differentiating factor for this year’s flu season?

“Influenza B viruses have not predominated in the United States for 27 years,” according to a recent Centers for Disease Control and Prevention (CDC) report.

As of January 11, flu activity had declined slightly but still remained high, according to a CDC influenza surveillance report. Here are the stats and facts about this particular flu season so far:

Fighting the Flu in the Workplace This Season

The workplace is a petri dish for germs, unfortunately. Desks are especially germy, with more than 10 million bacteria on the average one.

As usual, the CDC recommends a shot and swears by flu vaccine effectiveness for high-risk individuals. Everyone six months and older should get flu shots, according to the CDC. While it’s best to get a flu shot by the end of October, it’s not too late to get one in January or any time before the end of the season.

Because it can take two to four weeks for maximum effectiveness, the sooner employees can get a shot, the better, for more protection during the rest of the season.

The flu season usually ends in April but can last into May.

While it’s still too early to tell the flu vaccine effectiveness for the 2019-2020 season, a shot now is better than no protection at all. Additionally, getting the flu shot helps protect those around you who may be at a higher risk of complications — like children or the elderly.

Even if your team gets flu shots in January, it’s still effective. For those who aren’t interested in flu shots, there are still other simple techniques you can share in the workplace to prevent the flu from spreading.

During flu season, remind employees to:

Above all, encourage employees to take care of themselves. Ask that they seek medical attention as soon as possible if they think they have the flu. Doctors have medications — and medical advice — that may help lessen symptoms and cut the flu down faster.

Does your team get flu shots in January? If your employees got flu shots, let us know your thoughts about the flu vaccine effectiveness for 2019-2020!  Learn more here about keeping the flu from taking over your office.